Little towns can have little gems for little people.  Birnam in Perthshire is one such find.  You could drive through it in seconds but if you actually stop you’ll discover a family friendly destination full of exploration and discovery.

Birnam is in the heart of Perthshire’s ‘Big Tree Country‘.  As you can gather the area is proud of its trees, especially the large historic ones but in Birnam the search is on for the oak that inspired Shakespeare when writing the Scottish play ‘Macbeth’.

From a kid’s point of view you walk, run, stumble, trip along an atmospheric forest track to find the mighty tree.  You see one towering up above you with a flagstone before it, this must be it- the triumphant kid runs ahead punching the air, the parents swell with pride.  It’s only then that you realise the locals have a sense of humour as this tree is not the Birnam Oak.  And neither is the next big tree you come across.  Instead of Shakespeare’s tree you’ve possibly discovered ‘The Young Pretender’, a sycamore of only 300 years old, a mere upstart compared to the real deal, but it’s suddenly all great fun dashing through the forest in hot pursuit of historic trees uncovering bluffs along the way. 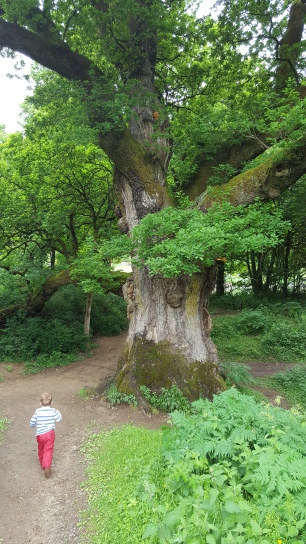 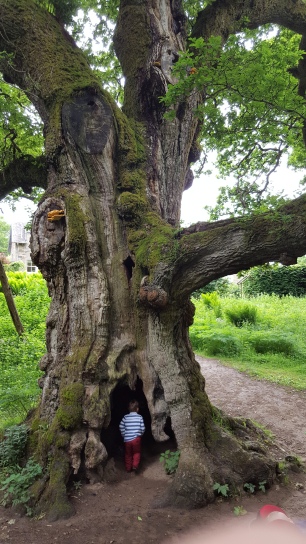 When you do discover the 500 year old Birnam Oak it looks like a fragile old lady.  Its branches are supported by pillars and emergency repairs were carried out earlier in 2016 as there were fears the tree could literally split in two.  The oak is a wonderful find for children because you can go right inside it – the first three metres of the tree are hollow.  It’s so dark and atmospheric within the oak that Mr Toddler would only enter the tree cave if either mummy or daddy were with him, which sounds laughable but to be honest I wouldn’t go near it at night as my imagination would run riot. 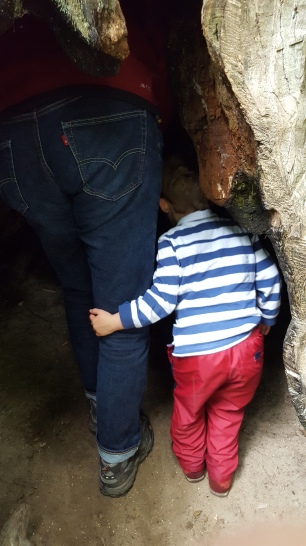 This tree would have been standing when Shakespeare visited Birnam Wood in the late 16th century.  The woodland inspired the lines in Macbeth where it’s predicted by the three witches that he “never vanquish’d be until Great Birnam Wood to high Dunsinane Hill shall come against him”.  But unfortunately for Macbeth his enemies camouflage themselves with branches from the wood and march on Dunsinane Castle – bummer!  Literary history aside it’s a great forest walk in lush green countryside.  There’s something moving about standing in woodland where Shakespeare himself may have stood over 400 years ago.

After a morning’s forest adventures take a peak inside the Beatrix Potter Exhibition in the centre of Birnam – the author spent her summer months in the area (in nearby Dalguise) and apparently wrote a ‘picture letter’ in Scotland which is said to have provided the basis for  ‘The Tale of Peter Rabbit’.  ‘The Tale of Jeremy Fisher’ is also said to have been inspired by river walks along the Tay. We accessed the free garden and let Mr Toddler and Mr Baby find all the animals. 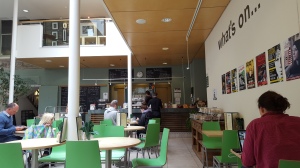 The Beatrix Potter Exhibition is housed within the Birnam Arts Centre; a modern, cutting edge arts facility with frequent performances and exhibitions.  It’s also home to a great cafe serving healthy light lunches as well as coffee and cake.  The menu clearly states the provenance of many of its locally sourced goods, so as well as supporting local producers by dining here diners know that all profits from the cafe go back into the Centre as it’s an established social enterprise.  Who doesn’t deserve a cake after hunting down the great Birnam Oak???

Tots2Travel stayed in a four star cottage at the nearby Moness Resort, a thirty minute drive from Birnam.  The whole Birnam experience was possible by parking up and exploring the area on foot (with a buggy).

Dear Reader please feel free to share with other parents

7 thoughts on “Day Out – Birnam, Beatrix Potter and Shakespeare’s Oak”